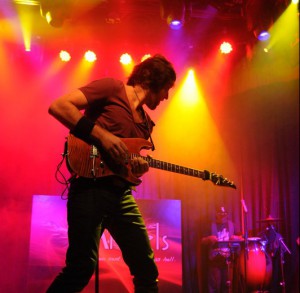 Hey guys, Dan here. Julian Michael and I teamed up back in December 2014 to bring you his arrangement of “Another Life” by D’Angelo. It quickly became the most popular article on my blog, shared over 500x and I’ve personally sent out almost 200 transcriptions to people all over the world. I’m taking this as a sign that we need to create more R&B/Gospel guitar content!

Let’s review what’s going on with the chords first. The key is C#m and the chords are cycling in a syncopated 16th note groove, with a lot of inversions and a cool altered 5 chord. You will want to finger pick the rhythm part. This is a great lesson on inversions too!

The C#m/E in the first bar is a C#m chord in the 1st inversion. In the next bar, catch the C#m7/B chord, which is C#m7 in the 3rd inversion. Don’t let the scary names of these chords intimidate you, they’re simply chords you already know with one of the chord tones moved to the top.

Another cool chord to dig is the altered 5 chord, the G#7(#5) found in Bars 1 and 3. Typically in the key of C#m the 5 chord would have been a G#m. Notice how the 5 chord can be altered to give a somewhat mysterious and tense color, by making it dominant and raising the 5th. You can see how this is a transitionary chord, which pulls the ear to another strong chord tone. What’s really cool about this altered 5 chord is that the E note stays constant in the 1 5 and 6 chord. In Bar 1, the altered 5 chord pulls back to the 1 chord, C#m9 (by the way I absolutely love that C#m9 voicing.) 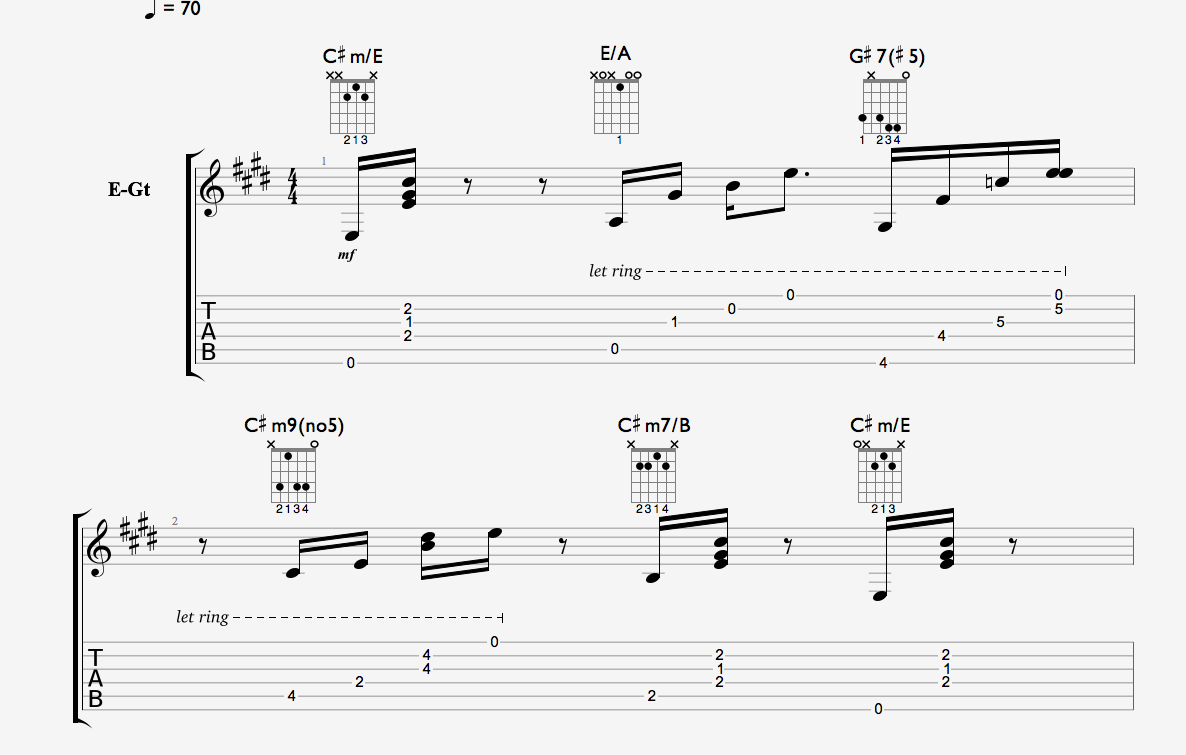 Alright, let’s dig into the solo! Bar 1 starts off with an E Pentatonic Major run, with a tasty quintuplet 32nd note hammer on pull off lick, ending on a cool hammer on to an F#, which sounds so great because F# is one of the main chord tones in that hip G#7(#5) chord.

Notice again how this is over the altered 5 chord, the G#7(#5) – the C and F# notes in the solo are both chord tones. Just goes to show how you can take your existing arpeggios, alter just one or two notes, and be able to immediately use them over complex chords.

Bar 4 utilizes a blazingly fast descending E Pentatonic Major scale with hammer ons and pull offs. The lick is grouped into six 32nd note sequences. Make sure you accent the beginning of each new sequence to match the intricate feel of the groove.

OK, ready for the next one?

As you can hear, Lick #2 is a combo of chords and licks, played by only one guitar. A key signature here isn’t as well defined, as the riffing is more of Julian noodling around, but for sake of this article, let’s put it in B major.

To start off in the Pick Up Bar and Bar 1  we have the beginnings of a B Pentatonic Major scale, leading into a great voicing for what’s normally a C#m7 and D#m7 chord. By raising the 5th of each chord, you get a really beautiful, open sound. Raising that 5th turns it into an add9 chord with the 3rd in the bass. The final chord resolves to an Emaj7, or the 4 chord.

Bar 2 features some C#m riffing, with a walkdown from C#dim7 to A#dim7, resolving to a pretty E/A chord. By now, if you’ve been playing for a little while in this style you should notice that diminished 7th chord pattern. Any diminished 7th chord repeats every 3 frets – notice how C#dim7 and A#dim7 have the same exact notes. Keep this in mind when you are looking for ways to connect long distances on the neck or are looking for substitutions!

Bar 3 begins with a pretty Cadd#11 chord, then explodes into a riff that made me want to transcribe this in the first place. Considering I said the tonal center of this video was B, the scale Julian used could be called B Dorian b2. If you know a little bit about the Melodic Minor scale, then this scale is just the second mode of A Melodic Minor. It’s a 16th note triplet pattern with the first 12 notes (or 4 groups of triplets) repeating a cycle: The notes are: B C E F# G#, B C E F# G#, B C. 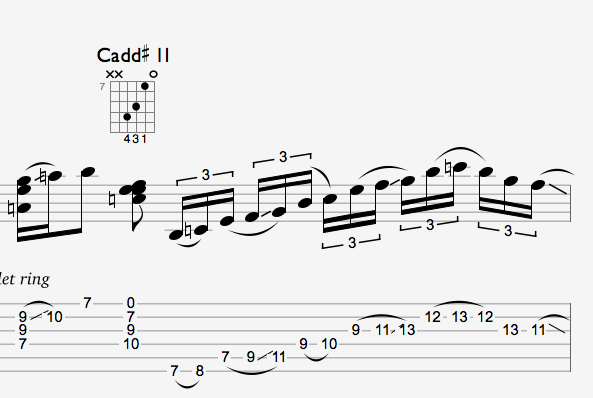 Below I’ve uploaded the Guitar Pro transcription to a Youtube video, which you can follow along to or pause as you see fit.

If you got this far, then please fill out the email newsletter form below or the “Want Free Tabs?” widget on my blog to receive an email update any time I post a new lesson like this. I appreciate it. Have fun! Until next time.

Sign up below with your name and email address and I’ll keep you posted any time I add a new article like this to my site. It’s free!

While working nights in AC as an entertainer, he spent the days commuting to Rowan University, graduating at the top of his class with a bachelor’s degree in Marketing. He founded Main Stage Marketing LLC in January 2012, specializing in social media, internet/mobile marketing, and creative promotions. Dan has also continued to give back to the community through his work with charities AC Rescue Mission, Red Cross, Philabundance, and Shirley Mae.