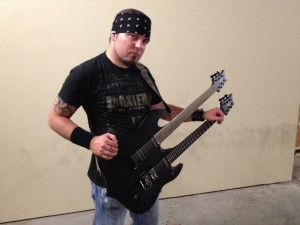 Hi there, and welcome back to Rigonomics! I hope that you enjoyed reading the first installment, all about picks! My plan is to cover tone creation for guitarists from it’s source, all the way through the signal chain, employing different strategies to ultimately achieve the tone you hear in your head.

Considering the last post was about picks, the next area of concentration is going to tackle the mystery of how guitar strings affect tone.

The methods of discovery in this area are somewhat similar to the experiments we used previously with our pick tests. As was the case previously, there are a myriad of different brands, gauges, materials, construction, etc that are worth exploring on your personal tone quest.

I assume that we all know what a “string” is for on the guitar, and understand the principles that make it work. I think it’s safe to say that as children, most of us pulled on the cords attached to the hoods of our coats and plucked them. The resulting sound is the exact same principle that allows us to create music using simple materials like steel or nylon. A length of wire held to a consistent tension will produce a musical pitch.

When Should I Change My Guitar Strings?

Guitar strings generally will maintain their feel, tone, and stability for around 30 hours of playtime. So if you play an hour a day, I’d recommend changing your strings once a month. Obviously if you are outdoors or in an environment where you are sweating more than usual, you will need to adjust that figure.

There are really only two types of strings, plain or wound, however those two types have many different variables in material, gauge etc. I think it would be appropriate to discuss the various different types of wound string (plain strings are just that, one material, but wound strings have different manufacturing, materials, etc.) and some of their tonal properties. 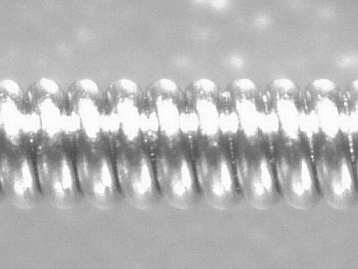 Round wound strings are what most of us use all of the time, and really are fairly simple to make. The plain wire, usually steel, is wrapped with another material such as nickel plated steel, pure nickel, or stainless steel.

Obviously these materials lend themselves to electric guitar as their movement is tracked by a magnet (pickups will be covered in the next installment).

Of course these are generalized descriptions, but hopefully you will have an idea where to begin as far as the materials used for round wound electric strings. Round wound strings are generally all purpose and not “style specific” like the next category, flat wounds. 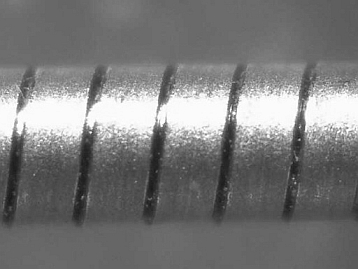 Flat wound strings like round wound have either a round or hex core. (Plain strings obviously only come round, hence all of the discussion about the wound strings.) Unlike round wound strings, flat wounds have a really smooth feel due to their construction. The “ridges” mentioned previously are practically non-existent. There are pros and cons to this type of string.

Half Wound (or Round) Strings 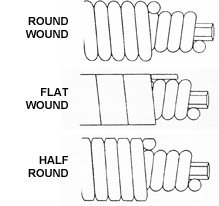 Half wound (or round) strings are literally a combination of the first two we have discussed. They begin as round wound, and are polished flat to create the feel of flat wound with a tone somewhere between round wound and flat wound. These are uncommon in use and therefore harder to find in various gauges and brands at your local store.

It should be noted that there is one particular string that is extremely important….if you read the last post, or happen to know me personally, you already know what I’m about to say….

In more ways than you think….the G can be either wound or unwound, personal preference of course, but it should be noted the thicker the gauge, the more likely it will be wound. A wound G is harder to bend and not as bright as an unwound one. Just like an “undressed G string” is much easier to manipulate, if ya know what I mean. (pauses for laughs)

Now that we have materials and types covered, let’s discuss gauge. Gauge refers to the thickness of the string and is probably the most important thing to experiment with. (It is also the toughest one, as significant changes in gauge will likely require guitar adjustments to compensate for the added tension).

Some people argue that the only way to good tone is to use heavy strings. My response to this is multi tiered….in an ideal world, we’d all play 12 gauge strings, but the reality is that there is much, much more to “tone” than the gauge of the string.

If the guitar is really hard to play physically because of thick strings, you won’t sound as good in your performance. And a bad performance with “fat” tone is still a bad performance. Not only that, but you risk injury to your hands by using strings that are not comfortable to play. Heavier strings are harder to bend, and generally require higher action (height of string from fretboard).

I strive for a compromise between playability and tone when it comes to gauge. Another consideration is the scale length of your instrument. (The distance from the bridge to the nut). A Fender Strat for example has a 25 1/2in scale length vs a 24 3/4in scale for a Gibson Les Paul. The same gauge string will feel different on those guitars due to their inherent differences. You would likely be able to have a heavier gauge on the shorter scale than you would feel comfortable with on the longer variety.

Although this series has the intent of catering to electric guitarists, I will briefly mention some differences in acoustic strings. All of the previous things apply, but generally acoustic strings are heavier in gauge for projection purposes, to get more out of the top of the guitar as far as vibration and tone, and due to the lack of amplification. A lot of those issues have been addressed in live situations via micing or onboard pickup systems, but one will usually be at least one gauge higher than what they use on electric.

Phosphor Bronze and 80/20 Bronze are the most common acoustic string alloys.

As I recommended in the last column, finding out what your favorite players use should start the process, and maybe eliminate some of the guess work. What I recommend is to try a different brand at every string change. As long as you keep the same gauge (9s, 10s, etc) you shouldn’t need to adjust anything on the guitar. You can try the different alloys, brands, and processes.

Some of the more unusual processes I feel are marketing gimmicks mostly, but as I said, they are all worth trying if it interests you. Dean Markley has their Blue Steel stings which are made using cryogenic technology to lower temps in manufacturing to create a more brilliant, durable string. DR Strings uses what they call “compression winding” which is more winding material than other companies use, but maintaining gauge.

Ernie Ball recently released their Cobalt line of strings which make some bold claims as to performance due to the characteristics of cobalt. And of course, “coated” strings are all the rage these days. Practically every company has their take on this process, but basically they coat the string with their proprietary blend of chemicals and it increases string life, supposedly without affecting the other factors. That has not been my experience, but again, you have to find what works for your tone, feel and budget. Maybe replacing your string less often is more important to you than a dampened high end response.

Wrapping it Up (No Pun Intended)

Fortunately, strings are relatively inexpensive, and as another “disposable” part of your rig, you will change them frequently. The frequency in which you change your strings will afford you many opportunities to try the offerings of other manufacturers, and a glimpse into each of their ideas as to what the “ideal” string is all about.

Now get out there and change your strings. Experiment with things we’ve discussed here. Find your sound, and before you know it, you’ll be a master of G string manipulation!!!!

Follow Shawn
Shawn Christie
Shawn Christie has been playing guitar for over twenty years, and has been fortunate enough to share the stage with some of his heroes such as Guthrie Govan (Asia, Dizzee Rascal, The Aristicrats) Bryan Beller (Dethklok, Steve Vai) Alex Skolnick (Testament, Trans Siberian Orchestra) and Grammy award winning group Take 6.

Shawn has remained extremely active through recording, clinics and live performances. Shawn’s original fusion/ prog-metal group Zeroesque, has garnered critical acclaim as well as a strong fan base. He has been a clinician for New Jersey State Council for the Arts, as well as teaching more than 30 students per week privately for the last 15 years. Shawn currently performs in two house bands in Atlantic City, NJ: one for the very successful Legends in Concert Tribute show at Bally's Casino/Hotel, and the other at Ivan Kane's Royal Jelly Burlesque Nightclub at the lavish Revel Resort and Casino.