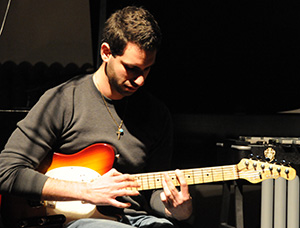 People have been asking me to create a two hand tapping guitar lesson, so I am excited to present the first of what I would like to make a series of tapping lessons with accompanying videos. What I love about this piano-esque technique is the possibility of creating chord/melody arrangements with a wider range of intervals and chord voicings. Also, the percussive element adds a great feel.

*Transcriptions and Video Tutorial included in this article*

I will begin by discussing basic Major and Minor arpeggios which can be used for a rhythm or lead oriented part. Although there are numerous voicings, I will discuss voicings that span 3 various string groups. Before we get started, here is a list of terms you should know for this article:

Now let’s get started. I will break things down into 3 basic steps:

2. Play each arpeggio with the 3 patterns that will be discussed.

3. Apply arpeggios and patterns to chord progressions of your creation.

In example 1, we see a Major arpeggio followed by a Minor arpeggio using the 6543 grouping. This particular shape goes from Root, to 5th, to octave, to 3rd, as will all the shapes discussed in the lesson. To execute this, tap the root (R) LH, then the 5th RH, octave RH, and 3rd LH. Apply this pattern to all arpeggios to get started. Examples 2 and 3 are the same idea using the 5432 and 4321 groupings respectively.

Now let’s begin to apply some patterns to these arpeggios to give you some variations.

Pattern 1 uses a 3 or 6 pattern, depending on how you look at it. I like this one because it incorporates an ascending and descending component:

Pattern 2 utilizes the left hand first, then completing the pattern with the right hand:

Pattern 3 is simply the pattern we used to execute the initial Major and Minor arpeggios:

To bring this lesson to a close, I have transcribed a lead exercise/lick that uses pattern 1 over various chords in the key of D minor. This can be seen in the beginning of the accompanying video as well as a slowed down version towards to end.

After playing around with these basic shapes you will most likely find yourself experimenting with different chords/voicings by simply moving the same fingers to different frets. This style naturally lends itself to creating unique intervals and sounds. In the upcoming lessons I will advance on the Major and Minor shapes in addition to discussing the application of all this.

Follow Vahe
Vahe Sarkissian
Vahe Sarkissian, winner of 93.3 WMMR's lead guitarist position in Jaxon's Building the Band, is a Philadelphia-based guitarist who has made a reputation for his progressive and modern approach to the electric guitar. While studying for his Master's at The University of the Arts, he began experimenting with a style of playing guitar involving 2 handed tapping, such as a Chapman Stick would be played. It was then that he received the Fender Outstanding Guitarist Award.

Some of his accomplishments include performing at The Susquehanna Bank Center, The Electric Factory, Tower Theater, House of Blues, Trocadero, TLA, and the World Cafe Live.He has opened for Slash, The Roots, Shinedown, Halestorm, Godsmack, Steel Panther, Foxy Shazam, Joe Stump, and more. Additionally, he had a single played on 93.3 WMMR, and has been interviewed by Preston and Steve, Pierre Robert, and Jaxon.

Vahe has also had the opportunity to be mentioned in several publications. His press includes a feature in Guitar World magazine, Progression Magazine, and The Philadelphia Inquirer.