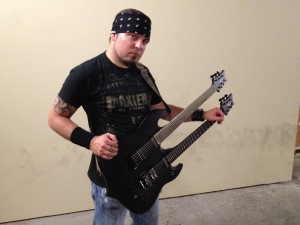 Welcome to the first installment of what promises to be an ongoing discussion about the very thing we desire most….money!!!!

No, all kidding aside, we will be speaking about what most guitarists lust after….women!!!!

I’m seriously being serious about an extremely serious topic that most guitarists take seriously….(I’m cracking myself up, and hopefully you too)

Before we begin, I’d like to thank my former student, fellow gear nerd, amazing guitarist/singer, and all around good friend Dan Jost for suggesting I participate in a discussion such as this. For the record, I’d like for it to become a discussion more than a monologue; this should be informative and entertaining. As we continue through the series, it will get more technically oriented, and I imagine somewhat boring for those not interested in the NASA types of rigs we will eventually discuss. I will try my best to inject some humor, and make it an interesting read, even for those folks that prefer nothing more than a cable between their favorite axe and amp. This is a pretty deep topic, so any and all thoughts on the subject are welcomed and encouraged. Without any further adieu….

If you are new to the guitar, or new to the prospect of putting together a complete guitar rig, this first part will be of great importance to you. Before you can begin to sculpt your own signature sound and develop great guitar tone, it is important to determine your wants vs. your needs vs. your budget. Quite often, it is possible to achieve really great tones with very modest equipment. I’d hate for someone to feel as though they cannot benefit from a blog such as this due to a lack of finances. Rest assured, I will give multiple examples of equipment that will suit every wallet, no matter how slim or fat.

At this point, it’s probably a good idea to mention that other than the companies I’m affiliated with through endorsements, most of the brands and product names that will be discussed here have not authorized me to use said titles, and I’m not selling one over the other. This is merely a tool that will hopefully send you in the right direction on your quest for tone.

Now that the business is out of the way, saddle up….let’s begin!

I think a good place to start, is with where your tone begins….and generally also the cheapest part of your rig….guitar picks!

You may think this trite, to start with something so “disposable”, however a plectrum you are comfortable with can literally make a huge difference in how you play, and what it sounds like. Picks come in all sorts of shapes, sizes, and materials. It is certainly a worthwhile endeavor to try as many as you can, until you find “the one”.

(Sounds vaguely like that quest for women I mentioned before right? See? There’s that humor I mentioned. I will pause while you compose yourself….)

So how do guitar picks shape your tone? It should be noted that picks will sound/feel different from acoustic to electric guitar, and it is quite common for players to use a different pick for each. Now you may be asking “how do I know where to begin?” The answer to this question starts with examining your personal goals on the instrument. Do you need a quick attack? A smooth release? A bright tone? A warm tone? These are all very personal choices, and you may not even know what you want at this point. That’s ok, it’s part of the process of discovery that comes along with ones growth as a player. If this sounds like you, I recommend doing a little research to see what your favorite players use. Odds are if you consider someone a big influence, you probably would like to play somewhat like them, and they have done some of the work for you by choosing a pick that helps them to create that music you like so much.

Let me clarify the last statement: using the same pick as your favorite player will probably not make you sound like them….but you knew that already. There’s a lot more that would be necessary to duplicate someone else’s tone, and for the most part, it is a futile effort as all players have a unique “fingerprint” even when using the same gear.

So after you’ve done your research, it’s time to go to the store or online retailer (the former being better for onsite testing). Awhile back, stores used to have big pick displays that would allow you to buy a single pick or as many as you’d like, and they weren’t in packaging. Obviously that was great for a couple of the experiments we will be discussing, but bad for business, because quite often they would be accidentally stolen, and also allowed someone to make a purchase for as little as 25 cents. These days, picks generally come in little bags that you have to buy before you can use. Fortunately, it is still a very small investment to buy a few bags of varying styles to try. If you had done your research that was mentioned in the last paragraph, you would probably only have a few to try at first anyhow.

If you haven’t done said research, I would suggest buying a standard 351 shape pick in the most common materials….celluloid, nylon, and delrin. There are plenty of other materials, but these are the most commonly used. Not to mention some of the more “exotic” materials can cost quite a bit of change. The other thing to consider at this point is gauge, or thickness. Generally speaking “strummers” prefer thinner picks and players that do a lot of single note stuff prefer thicker. Again, this is personal preference, and each has a specific tone and feel.

Now that you have some picks to experiment with, let’s discuss a few things you need to try in order to get closer to finding the one that agrees with you most. The very first thing you can do is to check to see if the edges are smooth or have little divets from the manufacturing process. Next, drop each pick on a hard surface and listen to the tone. Does it sound high and clacky? (I know, I know, this is where it gets weird with onomatopoeia) Or rich and low? Some folks disagree, but I think you can get an idea what a pick will sound like by doing this simple experiment.

Next choose one to start to play with….strum a chord with the thin one….now the thick one. Notice a difference? I knew you would. Strum that chord again with the same thickness, but different material. Hear a difference? Ahhh, you’re getting it now. Do the same thing with some single notes. You should be starting to get an idea of what you like from that purchase. Now play….all kinds of stuff….with the same pick. Check its durability.

After you’ve experimented with this first batch, maybe you’ve determined that you like celluloid, and nylon, but not delrin. Ok, now try some different shapes. Picks can be very pointy, or very round. Again, very much personal preference, but there are some general principles at play.

Surface area of a pick will contribute to how “quickly” the note is created. A pointy pick will have a more immediate attack than a round one. If you play fast styles such as metal, this will probably be the shape for you. If you are a folky strummer, 351 or rounder and thinner will probably be best for you. I’d like to reiterate that there are no hard and fast rules here, but by putting forth these simple guidelines, you can eliminate some of the experimentation with shape and thickness, in favor of brand and material. For example, I have used heavy gauge pointy jazz picks for years, but have experimented with materials. For me, it was the Dunlop Tortex Jazz III, then the nylon Dunlop Jazz III, then the stiffo nylon Dunlop Jazz III, finally discovering the Little Jazzer heavy gauge from Red Bear Trading Co.

I hope you have found this helpful, and have realized that the humble plectrum really is the unsung hero in anyone’s rig.

And if I have this much to say about picks, just wait until we get to midi switching, wet/dry rigs, etc.

Now, take your favorite pick and go out there and make what we desire most….you thought I was referring back to the first line didn’t you?

Follow Shawn
Shawn Christie
Shawn Christie has been playing guitar for over twenty years, and has been fortunate enough to share the stage with some of his heroes such as Guthrie Govan (Asia, Dizzee Rascal, The Aristicrats) Bryan Beller (Dethklok, Steve Vai) Alex Skolnick (Testament, Trans Siberian Orchestra) and Grammy award winning group Take 6.

Shawn has remained extremely active through recording, clinics and live performances. Shawn’s original fusion/ prog-metal group Zeroesque, has garnered critical acclaim as well as a strong fan base. He has been a clinician for New Jersey State Council for the Arts, as well as teaching more than 30 students per week privately for the last 15 years. Shawn currently performs in two house bands in Atlantic City, NJ: one for the very successful Legends in Concert Tribute show at Bally's Casino/Hotel, and the other at Ivan Kane's Royal Jelly Burlesque Nightclub at the lavish Revel Resort and Casino.